How is a range hood’s power measured?


A range hood is one of the most important appliances in the kitchen. It consists of a canopy or some other type of “capture area” and a fan or blower motor to extract the pollutants caused by cooking and expel it to the outdoors. By capturing and eliminating the contaminated air right at the source, the range hood maintains the air quality in the kitchen and makes cleaning much easier. While there are many options available, not all hoods are created equally. Take a hood’s power, for instance. 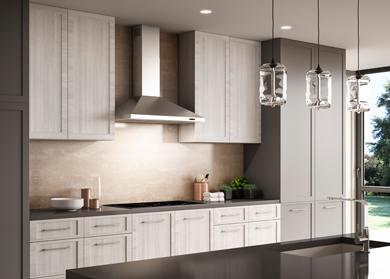 One of the key features to look for in a range hood is the number of cubic feet per minute (CFM) the fan can move. It’s a measure of the hood’s power. A general rule of thumb is that you need 1 CFM for every 100 BTU’s your range produces. So, if your gas range produces 45,000 BTU’s, you should look for a hood that can move 450 CFM.

Seems easy, right? Well, it’s not quite that simple.

The installed power/airflow of a range hood or over-the-range (OTR) microwave is heavily dependent on how it is ducted to the exterior.

Normal duct runs should be designed and installed to be as short and straight as possible and the diameter/dimension of the ducting used should be at least as large as the duct connector on the hood. Reducing the duct diameter will reduce airflow. And a duct run with multiple elbows or bends will also reduce airflow. Also, rigid duct/pipe should always be used as flex duct causes more airflow resistance. Well-designed duct systems have lower static pressure – that is a measure of the resistance to airflow – and thus allow a given range hood to easily move more air.

How can you be certain you’re moving the right amount of air?

The Home Ventilating Institute (HVI) certifies the airflow and sound levels of range hoods according to a stringent testing and verification protocol. Broan HVI-certifies all of its range hoods so that you can trust the stated performance. This isn’t the case with every manufacturer, so be sure to look for the HVI certification on the package.

Airflow testing is conducted at a variety of static pressure points (i.e. essentially under a variety of potential duct system scenarios) from which a curve can be developed showing how much cubic feet per minute (CFM) of air a given model will move at different static pressure points.  A typical curve looks like this (note that it can also vary by the ducting direction coming off the hood such as vertical vs. horizontal). 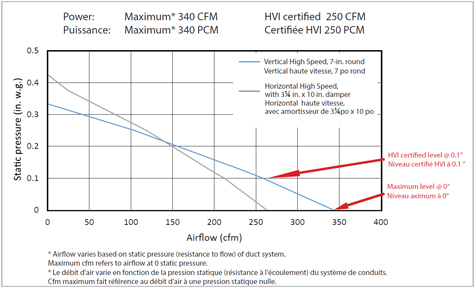 An alternative measure of airflow/power can be considered at 0 static pressure which is to say if there was no ducting attached to it at all.  These CFM ratings will of course be significantly greater than a 0.1” reading. Many non HVI-certified brands appear to use a measure such as this.  Broan defines this non-HVI-certified level as the “Maximum Power”.

Conclusion
Remember, always look for the HVI certified label on ventilation products such as Broan range hoods so you can trust the rated performance.