US Army SSG Rico Roman and his two brothers were raised by their single mother. Inspired by his uncle and great uncle’s service in the military, Rico joined the US Army in 2001. He began as a gunner and in 2006 became a squad leader. He carried the responsibility of leading two teams.

While on his fourth deployment, on February 22, 2007, Rico and his team were on convoy mission in Iraq. Their Humvee was blasted by an improvised explosive device (IED). Rico, who was riding in the passenger seat, remembers thinking, “I’m not walking out of this.” He was flown to Walter Reed National Military Medical Center where he endured extensive surgeries on both legs. Due to his injuries, he was confined to a hospital bed for three months.

While the doctors were able to save Rico’s legs, he remained in unbearable pain through therapy for the following year. Rico eventually made the decision to have his left leg amputated above the knee. He still suffers immense pain in his right leg but is hopeful that no further damage will occur. 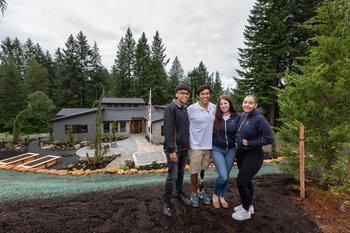 Rico and his wife Ela were married on January 8, 2017. The couple live with his two children in Colorado Springs. Their home presents major challenges as almost every room requires Rico to use stairs. The Gary Sinise Foundation is honored to provide this deserving hero and his family a specially adapted smart home to ease their daily burdens.

About the Gary Sinise Foundation and Broan-NuTone Relationship
We believe everyone should have a home that provides them with comfort and clean, healthy air. We believe this especially important for those who make having a home possible. That’s why we at Broan-NuTone support the Gary Sinise Foundation’s RISE program. The RISE program builds one-of-a-kind specially adapted smart homes for our nation’s most severely wounded heroes. Our ADA compliant range hoods, provide fresh, healthy air for